While grazing through old issues of electronics magazines, looking for low power AM transmitter plans and schematics you can build, I found a handful of low power radio opportunities in different frequency bands. 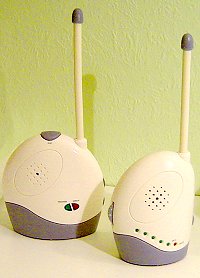 In this post we'll look at a the low power FM opportunity in the virtual low power FM transmitting playground known as the 49 MHz band.
This tiny slice of spectrum from 49.82-49.90 MHz is described in a bit of light reading from the FCC titled PART 15, RADIO FREQUENCY DEVICES; Subpart C, Intentional Radiators; Sec. 15.235; Operation within the band 49.82-49.90 MHz.
The 49 MHz band is still used by some baby monitor manufacturers but most have moved up to the various ISM bands 900MHz/2.4GHz/5.8GHz. Fortunately, 49 MHz models are stil available new, in thrift stores or at baby monitors on Amazon and baby monitors on ebay.
Historically, this spectrum was once quite crowded. Back in 1978 a 49 MHZ radio club was formed for boosting the 49.820 - 49.9 MHz license-free CB walkie-talkie band set up by the FCC to get those kiddie toys away from 27 MHz where they were interfering with adult base and mobile stations.
49 MHz gear is limited to a maximum of 0.10 watts of transmitter power and antennas up to only about one yardstick in length. The club was for public service, emergency work.
This band was once crowded with walkie talkies and cordless phones but is now largely abandoned, perhaps providing an opportunity for a low cost, low power STL. A 49 MHz baby monitor won't have audiophile quality bandwidth but could be adequate for supporting an AM transmitter located some distance from its audio source.
Connecting to monitor output to the transmitter input is pretty straightforward and here's a handy link for information on how to connect the audio source to the bay monitor transmitter for best audio performance.
Many of us remember those 1980s gadgets but if the 49 MHz era missed you completely, here are a few contemporary write ups: