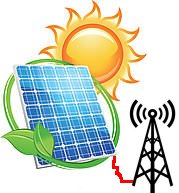 Over the last few months I've been experimenting with solar powered low power radio and it's been quite an education.
My location in the rainy Pacific Northwest, on the Canadian Border, made the project even more interesting. Luxuriously long summer daylight and brutally short winter days, unpredictable cloud cover and several weeks of wildfire smoke probably present far more challenges than most of our readers will encounter.
The first effort, titled Quick and simple FM radio station goes solar, used junk box items to investigate the concept. After connecting the apparatus and handing the power duties over to the sun, the first discovery made was that of flawed thinking.
Yes, I thought the solar panel delivered about the same amount of current as the apparatus used but what about recharging the battery? Duh!
When the battery went dead after about 10 days of operation, I realized I had created a solar assisted low power radio station. In other words, while the sun was out the station ran on solar power but after the sun went down the battery took over. The following day the solar panel took over again but didn't generate enough power to run the station and recharge the battery. A simple oversight caused by my enthusiasm to get the project started.
I ran the station in solar assisted mode for a few weeks because this is still a pretty cool concept. Solar assisted is somewhat like a hybrid-powered automobile. I developed a schedule of recharging the battery with the wall wart charger once every seven days to demonstrate that even a solar assisted operation was better than being tied to a power outlet. For example, if I had two battery packs I could have done a weekly swap out and maintained remote operations in perpetuity.
After I found out what it would take to deliver a fully solar independent operation, the 'solar assisted' concept became even more appealing but more about that in a future post.
Realizing that I needed far more solar power for this to be practical, I decided to get serious about the math.
First, when I placed my VOM between the power source and the load, I discovered I had significantly underestimated the current draw of the radio station. The Scosche transmitter, MP3 player and attendant voltage management modules didn’t draw the 125 mA I had estimated. Instead, I measured over 220 mA or almost twice what I estimated.
This also meant that the solar assisted mode never fully carrier the burden. The solar panel merely  slowed the rate at which the battery discharged.
In my original post I postulated a second 1.5 watt panel might help but a better understanding of the power demands of even the very low power transmitter being used rendered that assumption ridiculous.
The good news was that when I went looking for more power, I discovered that plummeting solar prices had brought down the cost of a ten watt panel to below the cost of the 1.5 watt panel I purchased a few years ago.
Ohm's law tells us that a 10 watt panel at 12 VDC can provide 800 mA of power to the system and that was encouraging. With about 8 hours of darkness during the summer, I needed 8 X .220 or 1.76 (rounded up to 2) amps of reserve power for overnight operation. 800 mA of solar power would easily provide the 220 mA I needed to run the station and and an additional .580 mA to charge a battery. 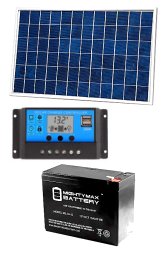 If my system could deliver 220 mA to the micro radio station and .580 mA to the battery, four hours of charging should give me the overnight reserve I needed. With 16 hours of daylight, I should have more than enough power for full solar operation.
With renewed confidence in my approach, I ordered an ECO-WORTHY brand 10 Watt Solar Panel and a PowMr 10A Solar Charge Controller (a 1.5 Watt panel doesn't need a controller in a high demand circuit but a 10 Watt panel definitely needs controlling) from Amazon (total cost ~$25.00 with sales tax) and grabbed another surplus battery from my junk box, a 10 Ah Sealed Lead Acid (SLA) battery
I retired my old power plant and moved the new system into service and waited for the results.
To my delight, this second version of the operation proved to be a winner. Week after week, the MP3 player played, the transmitter transmitted and power was abundant.
So, is that the end of the story? Would I be content with my little hacked Scosche transmitter and it's one block range? Stay tuned...
"Experimental broadcasting for a better tomorrow!" It's not just a saying, it's a way of life!
Email ThisBlogThis!Share to TwitterShare to FacebookShare to Pinterest
Labels: experimental broadcasting, hack FM transmitter, hobby broadcasting, low cost beginner FM transmitter, recreational broadcasting, solar power, solar powered transmitter