For me, using obsolete technology to feed my transmitter started with my first effort.  A discarded auto reverse mono cassette recorder fed a 13 minute prerecorded message into a hand made AM transmitter.
That transmitter insisted on a frequency of 790 KHz (even though it was using a 1000 KHz XTAL!) but when my car radio tuned in my shaky, flaky little set up, I was hooked.
After several auto reverse units and dozens of worn out audio tapes, the process continued into the digital audio realm, where the options are many-fold.
I gave my efforts the nickname SCASP, for Scrap Computer Audio Source Project, and happily plowed through a variety of oldies but goodies.  An early web documentation of my first efforts can be found at the original S.C.A.S.P. page as part of an archive of one of my first low power radio sites.
An old PC chassis running a DOS audio player on a RAM drive, a discarded Palm Pilot with a (gasp!) 256 MB mini SD card, a Dell notebook running Windows 98, an early model 512 MB capacity MP3 player and now, in an embarrassing testimonial to first world problems, I find myself with a surplus (?) expired contract smartphone.
My old (?) Samsung Omnia was an early Windows phone 6.0, from way, way back in 2009. Blocked by the provider from accessing WiFi without a service contract and featuring an easy-scratch screen that now looks like it was worked over by Freddy Krueger, this little handset had become a paperweight - in other words, perfect! 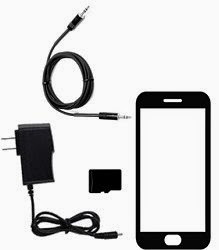 The four attributes that put this little chunk of technology in the SCASP category were
After loading the files into the SD chip, using a USB card reader/writer, even the native Window Media player can be used to create a play list.  Connect the audio to the transmitter and it's on the air.
What undiscovered bit of SCASP magic is collecting dust at your QTH?  I guess I could rename it SCRAP, for scrapped cellphone recycled audio programmer!