How to build simple AM transmitters with a NAND chip

Note: The cost of doing the right thing - we didn't steal any of James' content so when he took it down, we lost it.  If you're out there, James, please put your site back up!
Our low power radio friend James Razzetti from across the pond in the land of the Renaissance, Italy, has been writing extensively on low power AM transmitters. Now that Google translate works almost as well as the Universal Translator in Star Trek, we English speakers can enjoy most of James' writings - Grazie Google and Grazie Italia!
Speaking of Star Trek, James begins his low power transmitter odyssey by providing plans to build a low power AM transmitter out of discarded AM radio parts, much like Kirk asked Spock to do in one of their time travel episodes. Using a 1 MHz IF can, James' Simple micro transmitter on medium wave (MW) gets you on the air with nothing but your junk box.
Next, James sets out on a journey to discover if he can ignore all of the specifications on a data sheet and convince a lowly CD4011 NAND chip to be a low power medium wave AM transmitter. The result is the surprising CD4011 3mW micro medium wave transmitter James names "La Pagliacciata" (a farce). 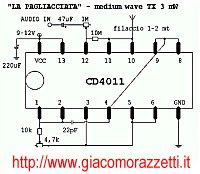 Next, James continues his voyage of discovery by adding a simple microphone circuit to arrive at a 3 Mw micro transmitter, "La Pagliacciata" (a farce) with microphone.
Having demonstrated the effectiveness of adding side car circuits, James dabbles with a buffer amplifier in his next iteration, a 500 mW CD4011 based medium wave transmitter called "Troiaio" (Pigsty).
Confident in his approach, James cleaned up the pigsty and added both a buffer amp and a final power amplifier to arrive at a robust 1.2 Watt medium wave transmitter "il Damerino" (the Dandy). While the preceding circuits, the Farce and the Pigsty, are good background reading, the Dandy looks like a dandy little transmitter project with great range into a well matched antenna and ground.
Last but not least, James answered a question that had been on my mind since reading about using crystal clock oscillators in transmitter circuits - Can we use higher frequency CCOs for shortwave efforts? The answer - yes we can. James created a simple shortwave transmitter called Ibrido or hybrid, for shortwave experimenting in his post entitled Simple micro shortwave broadcast transmitter
So hope across the pond digitally and see all of what James has been up to, his entire web site is fascinating!
Visit www.giacomorazzetti.it
Email ThisBlogThis!Share to TwitterShare to FacebookShare to Pinterest
Labels: AM broadcasting, AM transmitter, crystal controlled AM transmitter, low cost transmitters for beginners, low power AM, low power shortwave transmitters

Don't how old these posts are since there are NO DATES SHOWN, hopefully someone is monitoring ....

It appears that some of the pages are available on archive.org:
https://web.archive.org/web/20140221194349/http://www.giacomorazzetti.it/dblog/

Great catch, Mick. No dates are shown because this blog is timeless :o)