A treasure trove of tube transmitters 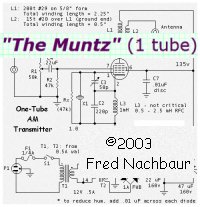 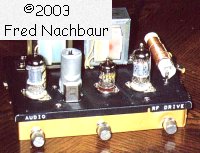 Editor's note - We recently learned of Fred's passing and have updated the links to his site to the Internet Archive
Friend to the low power broadcaster and tube aficionado extraordinaire Fred Nachbaur has published a fascinating collection of low power AM tube transmitters plans, giving tube fans a tremendous selection of tube transmitter building options.
Fred's phenomenal free-for-all stars with a delightful little one-tube wonder called the Muntz, which Fred describes as "a bare-bones transmitter that, with a 10-foot (3 meter) run of wire as an antenna, will readily transmit an AM signal to nearby radios."
But, as they say on TV, there's so much more. Fred offers three more tube transmitter projects offering both crystal controlled and VCO tube-based transmitters for any and all possible uses.
The top of the line is the Goldberg,which, as the author says, "...the ultimate crystal-controlled low-power AM transmitter. It incorporates a superior audio preamplifier stage, allowing better control of loop feedback. It also includes an effective RF amplifier stage which boosts the maximum output by 5 dB, to about 10 milliwatts. This is enough to improve the range by about 73%, or be enough to drive a linear amplifier..."
Fred's schematics are clear and easy to understand and the write-ups for each transmitter include extensive building and tuning suggestions.
But there's still more and you don't even need to order by midnight tonight. Fred, being a true tube troubadour, also offers plans for over a dozen audio projects as well, from pre-amps to instrument amplifiers to the truly frightening high power audio finals.
If tubes turn you on then Fred's great web site is a must-visit.
Email ThisBlogThis!Share to TwitterShare to FacebookShare to Pinterest
Labels: crystal controlled AM transmitter, radio memories, Simple low power AM transmitter, tube transmitters and plans