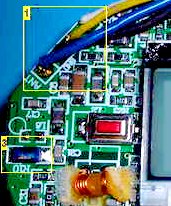 Curious about low power radio and interested in electronics? Perhaps you have one of these (or something similar) lying around and you'd like to try something fun. Here are some transmitter modifications for your study:
• Belkin Tunecast II Mod (12 page PDF)
• Belkin Tunecast F8V367 mod
• Belkin Tunecast Auto Universal FM transmitter Mod
• C. CRANE FM Transmitter mod
• Zune FM Transmitter Mod
• More on FM transmitter mods by Tim Gray
• Dozens of YouTube videos about FM transmitter mods
But, isn't it illegal to modify a transmitter or to operate a transmitter that has been modified? Short answer, no. When it comes to a hobbyist experimenting with a low power tramsmitter, the FCC rules are silent on whether the transmitter was purchased off the shelf, modified, built from a kit or made from scratch.
So what's the deal with "FCC certified transmitter" etc.? The FCC requires that any transmitter that is sold to the public for use in the FM broadcasting band be type certified before it can be sold. Sold, not operated. Once you buy it, it's yours and you can do whatever you want with it - except sell the modified transmitters on ebay :) The operative rule for FM transmitters is very simple - the field strength can't exceed 250 uV/M at 3 meters. Most agree that equals a range of around 200 feet on a low priced portable. A car radio will pull in that signal strength at two to three times that distance.
What sort of range will get the FCC upset? Well, the FCC speaks only in terms of field strength but the FCC's enforcement records are public and can be easily accessed here. As you can see, the FCC generally intervenes when the field strength reaches several times the permitted uV/M, often at distances greater than 3 meters. There are two reasons you don't have much to worry about if your modding a low power FM transmitter.
First, a transmitter can only put out a fraction of the power it consumes. The most awesome transmitter imaginable would only deliver about 30% of it's input power as radio frequency output. When you are modding a transmitter that was designed to run on two AA batteries, you're not exactly going to burn a hole in the wall with the fearsome radio power you unleashed with a basic mod.
Second, you are starting with a low power transmitter designed to be mass marketed. It's not like the manufacturer is going to toss in a bunch of pricey, high output components in the transmitter, just waiting to be unleashed by your mad mod. Far greater than the risk of being hauled away in irons by the FCC is the risk of being just a little disappointed in the results of your efforts.
The good news is that most mod-able low power transmitters do start with a little extra punch, then the manufacturer reduces the signal power (called attenuating) to make sure the transmitter delivers well under the 250 uV/M @ 3M rule when mass produced. A good mod, plus a well matched antenna, can restore that extra power and get you closer to the top end of the limit.
What is a "well matched antenna?" An effective antenna should start at a 1/4 wave (vertical) or 1/2 (dipole) wave length, then be adjusted to account for a peculiarity of radio frequency (RF) waves. To calculate wavelength in inches, divide 11811 by your frequency in MHz. For example, if I transmit on 87.9 MHz, 11811/87.9 = 134.37" and then a 1/4 wave vertical would be 134.37/4 = 33.6" but you need to make one additional adjustment. Radio waves travel on the surface of conductors rather than through the core, so RF moves about 5% slower. To adjust for this factor (called the velocity factor), we slightly shorten the antenna wire. 33.6 X .95 = 31.9" for a 1/4 wavelength antenna at radio wave speed.
A dipole is simply two 1/4 wave length elements, one connected to the hot RF output and one connected to the ground side of the circuit (a nice place to pick that up is the negative battery terminal or power connector).

And there you have it, a little peek into the mad mod world... for research purposes only, of course.
Email ThisBlogThis!Share to TwitterShare to FacebookShare to Pinterest
Labels: belkin mod, c crane mod, transmitter mods