A blogging tradition unlike any other, where you use other peoples content to make your own blog look good :-) 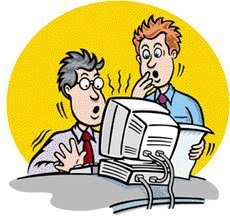